It seems like only yesterday that I was trying to make friends in a new-to-me town. The thought of actually running into someone I know while shopping was an exciting, yet unrealistic, prospect. A year later, after getting super (some would say overly) involved in a relatively small community, I often find myself going down an aisle of the supermarket I hadn’t intended on perusing to avoid seeing so-and-so from such-and-such when all I want to do is grab my dinner and go home. Sometimes I park the car and sit there for a few minutes while I watch so-and-so go into such-and-such before exiting my vehicle. With the number of run-ins and almost-run-ins I’ve had, you’d think I would’ve learned my lesson by now that seeing someone I know is always a possibility, no matter where I go. You’d also think that after all these years (and all the episodes I’ve watched of What Not to Wear), I would’ve learned my lesson about not leaving the house looking like the “before” of an ambush makeover. Apparently, I’m a slow learner.

Like so many, I spent the better part of today cleaning. As such, I was in junky jeans, an eh shirt, and zero makeup (we’re not going to even talk about the mess that was my hair). I decided halfway through the day that, after dropping Hubby off at the mechanic to pick up his car, I wanted to get my eyebrows waxed. My inner monologue went something like this: I should go to Nail Salon A because it’s right next to the bank, and I have to go the bank anyway. But I always run into someone I know there, so I’ll go to Nail Salon B because I doubt that anyone I know goes there, and then I can run into the shoe store and finally buy a pair of black flats, which I desperately need. Famous last thoughts.

I walked into the nail salon and did a quick sweep of the room from underneath the unbrushed hair hanging in my face. The coast was clear. I took a seat, burying my nose in my phone, as I waited a few minutes for the waxing specialist, or whatever the hell you call those sadistic people. Within ten minutes, I was headed toward the door with my red, blotchy, puffy eyebrows and a smile on my face. Less than two feet from my escape, my eyes just happened to make contact with those of the woman drying her nails next to the door. The woman that I knew.

My first reaction was dread – not because I didn’t want to talk to the woman – but because I didn’t really feel like having anyone I know see the “house me.” Once I left the nail salon, though, I realized how nice it is to be in a place where I know more than one person, to be part of the community enough to actually have the possibility to run into people I know while running errands. At the end of the day, it’s a good problem to have because that feeling of belonging – that sense of place – is much more important than what I look like while getting my eyebrows waxed.

Also, I got a killer pair of flats. 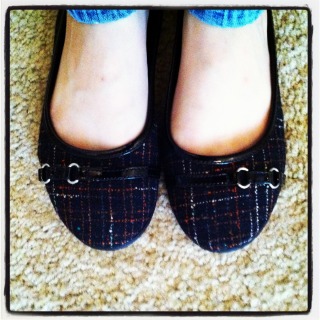 1 thought on “A good problem to have”