When I moved to FL as a kid, I was horrified to learn of flying cockroaches. (I learned about them as one flew overhead. *shudder*) Living in Bug Capital for 18 years, I thought I had seen it all in terms of creepy crawlies. I was sadly mistaken.

Whether it’s the rain or our “heat wave,” I’m not sure, but something sent an open invitation to every hideous bug to visit our house this weekend.
First there was the flat, greenish thing. He was ugly, but he had only four legs. Unfortunately, he was too high on the wall to reach, so I had to call Hubby to help (darn). Turns out, it was a good thing I played the damsel-in-distress card because, as Hubby informed me, the little guy was a stink bug and apparently smooshing him would have released an odor. I’ll hand it to you, stink bug – that’s a mighty fine adaptation for survival, but make no mistake. If it’s just you and me next time, I’m plugging my nose and whacking my shoe at you.
That science lesson, though, did nothing to prepare me for what I encountered last night. Attached to its exoskeleton (look who stayed awake in biology class!) were like ten legs (I think. You didn’t actually expect me to get close enough to count, do you?) and two antennae. It looked like it could’ve been a stunt double in Men in Black. 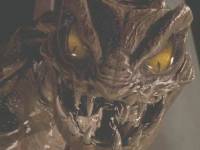 Hubby, being in the middle of watching a movie grading papers, said he’d “get it later.” Now I don’t know what kind of bugs he’s trained to stay, but the ones I’m familiar with usually flee the scene the first chance they get. And so, it’s…

Me vs. the Creature from the Hall Floorboard

First, I kick away the cat toys, careful not to get my foot too close to the monster, should he prove to be a jumping specimen.

Next, I go in search of an old shoe because I am not exposing my slippers, boots, heels, or flip flops to bug guts. Finally, I find a pair of sneakers that I use to paint and strip wallpaper. No one would be able to tell the difference between wallpaper paste and bug innards on those puppies.

Sneaker in hand, I peer around the corner, ready to attack. I bring the shoe down three times – whack, whack, WHACK! With the last whack of my shoe, the bug bounces, a sign of death and a sign that I’ve jumped back at least a foot, my heart beating as though I’m going to have to decide between fight and flight at any moment. I wait for signs of life. Not seeing any, I put my shoe away and run past the monster to the kitchen where I quench the thirst that bug hunting has caused.

Coming out of the kitchen, I see the bug’s body still lying there. He’s either really dead or one heck of an actor. I go about my business for the rest of the night and remind Hubby that he’s got a carcass to dispose of before bed. (I’m sorry, you didn’t think I was going to do said task, did you? Have you not been reading? They don’t make paper towels thick enough to create a safe barrier between me and the alien-bug.)

“Hey, Cher, where did you say that bug was?”

“Against the floorboard in the hall across from the bathroom.”

10 thoughts on “The creature from the hall floorboard”