Happy New Moon Day! ☺
Since I wasn’t able to see New Moon on opening night with the masses, I thought I’d join my fellow crafty, Twilight enthusiasts from Twilight Tuesday in a virtual celebration.
For a list of participants and to start at the beginning of the hop, visit Twilight Tuesday.
Though I just acquired some fun Twilight fonts and graphics, I opted to forgo those and focus on the words at the end of the book that resonated most with me when I first read it. It’s after Bella and Edward return from the Volturi, and Edward is trying to explain to Bella what life without her was like.
Edward tells Bella, “Before you, my life was like a moonless night.” So for the front of my trifold card, I chose a black glitter paper (source unknown because I’ve had it for close to a decade) to represent a moonless night. 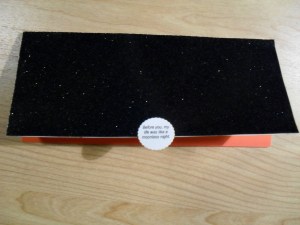 He goes on to explain, “And then you shot across my sky like a meteor. Suddenly everything was on fire.” Using Microsoft Word, I created a color gradient to represent Edward’s world suddenly on fire and cut a “meteor” from a Mrs. Grossman’s fireworks sticker.

Later in their conversation, Bella admits that she’s worried she’s not enough to keep Edward. He assures her that her “hold is permanent and unbreakable.” So inside the card is red and black patterned paper, inspired by the colors of the Twilight series (source, again, unknown because the paper is so old), and I used plastic bubble stickers over the letters of unbreakable to represent the protective bubble of their love.

Your next stop on the hop is Kathy at Pixie Dust Studio.
And if you’re looking for some great Twilight-inspired stamps, check out Artful Inkables.