I promised my friends that I’d shut-up while I finished grieving Patrick Swayze, but I have to go back on my word to talk about one of his movies.

After rejoining Netflix a few days ago, I decided it was a good time to see all the Patrick Swayze movies I’ve never seen before (I didn’t realize there were so many). Hearing so much about this movie on other blogs when Swayze passed away, I started out tonight with Red Dawn. I have no idea how this masterpiece managed to remain unseen by me for all these years.
I have to admit (insert Hubby rolling his eyes at me, if not openly laughing), I got a little choked up when one of the characters said to Swayze’s character that he could live to an old age. Sigh. I also thought it was a poetic movie to watch after Swayze’s passing because I saw a lot of the actor shine through it (yes, Hubby, I know I’m reading too much into it; let me have my moment): his ease with horses, the loss of his father, a close relationship with his brother, his courage fighting a battle he knew he ultimately couldn’t win. *sniff*
What got me through the sadness was the sheer enjoyment of seeing so many 80s kids together again. Are you ready for some help for the next time you play 6 Degrees of Separation?

image source
*Patrick Swayze, C. Thomas Howell, and Darren Dalton were all in The Outsiders together –

– one year before Red Dawn. (Fun fact: Darren Dalton plays Darrel in Red Dawn, which was Patrick Swayze’s name in The Outsiders.) 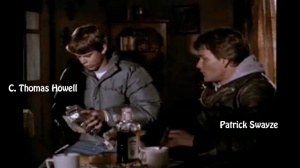 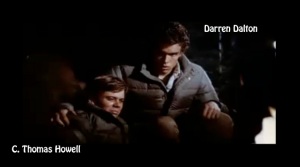 *Emilio Estevez was in The Outsiders – 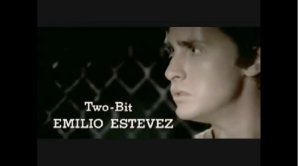 – and his brother, Charlie Sheen, was in Red Dawn.

*And, of course, Patrick Swayze and Jennifer Grey starred in Dirty Dancing together – 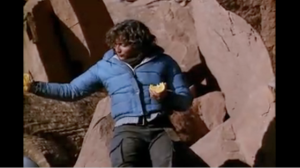 All images are screenshots from The Outsiders, Red Dawn, and Dirty Dancing, unless otherwise noted.
And if that weren’t enough to keep you entertained, the special feature should:

That’s right; it has a carnage counter! Unfortunately, Hubby and I didn’t make this discovery until after our viewing, so I guess that means I’ll just have to watch it again (darn). Mom, put this DVD on my holiday gift list. ☺