I can’t believe it’s been two weeks since I’ve posted. Miss me?

Before you start flattering me with your lies, let me apologize to my fellow bloggers for being a bad bloggy friend. It’s my mission to catch up on all your wonderful posts this weekend.
I wish I could say I was absent because I was sunbathing in Hawaii, but alas, I’m still freezing my buns off in PA. No, sadly, I dropped off the blogosphere because I’ve been sick and have pretty much slept away the past two weeks of my life.
With all that I have to catch up on – work, laundry, dishes, grocery shopping – why is my blog the dropped ball I felt compelled to pick up first? Because I obviously have my priorities straight.
When last I navigated to Blogger, I was in the middle of creating my first vlog post about Barack Obama’s inauguration. Since I won’t allow my friends and family to Skype with me until I’m looking better, the vlog is going to have to wait for another day. Because, yes, I’m just that vain.
So where does that leave me? With thoughts of all the TV I’ve watched in between naps.
My name is Cheryl, and I’m addicted to bad TV.
In my defense, I like good TV, too – LOST, ER, NCIS, SVU. Hm, apparently good TV requires the use of all capital letters. But I’m a sucker for the targeted-at-teens dramas.
Exhibits A and B: Beverly Hills 90210 and 90210 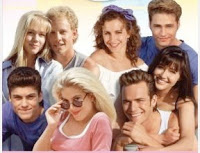 I would like to blame this one on nostalgia, pretend that because I didn’t know what good TV was when I started watching it almost 20 years ago (yikes!) that I am merely in denial. But that would be an outright lie. I know how bad the dialogue is, how unrealistic the plot lines are, and I still love the show despite these things. But at least I can pretend to have an excuse. There is no excuse for the new 90210. But still I wait with anticipation between each episode.
Exhibit C: The OC

I refused to watch this show when the first season started, but then I realized I wasn’t too cool for it after all jumped on the bandwagon. Once on, I rode it all the way to the series finale. Perhaps more embarrassing is how often I re-watch the series on DVD (which yes, I own). When I was sick, I got a hankering to start it again, for what is probably the fourth fifth time.
Exhibit D: Charmed 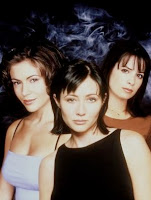 I would like to blame one of my college roommates for this one, but I’m not sure it’s completely her fault, if at all. I like Shannen Doherty, Alyssa Milano, and Holly Marie Combs. And I like witches. I mean, to vanquish demons (I can’t believe that phrase is now part of my blog for posterity) while trying to keep up the appearance of a normal life? Makes your life seem a little more like a cakewalk.
Exhibits E-G: ABC Soap Operas

Sigh. I shake my head at myself with this admission. This addiction is entirely the fault of my mother (yes, Mom, I mean you). Ryan’s Hope is one of my earliest memories of TV (besides shows like Sesame Street, of course), and as many times as I’ve tried to give them up, I just can’t. And if I’m being completely honest, I don’t really want to. There’s no better way to escape your own drama than to immerse yourself in the completely implausible and badly written (and often badly acted – there, I said it, Hubby) drama of fictional characters you love to hate and hate to love. I figure there are much worse ways to forget your troubles, right?
Exhibit H: Reality TV

What started out as one season of The Real World when it started in 1992 (Andre was my first imagined romance way before Edward Cullen and Eric Northman were created) has turned into a lovefest with the genre of voyeuristic drama. I make no apologies for Survivor. That’s quality stuff. But Big Brother is admittedly trashy (and I love it), and let’s not even talk about some of the other winners I’ve watched (ahem – Pirate Master, Joe Millionaire, Temptation Island – *cringe* – yes, I’m hanging my head in shame).
So there you have it: my addiction to bad TV. They say that admitting you have a problem is the first step to curing it. But truth be told, and perhaps to the chagrin of Hubby and my DVR, I’m not looking to kick the habit anytime soon.
Edit: It should be noted that in the less than 24 hours since I originally posted this, I am now also addicted to this season of The Bachelor. Fortunately, I have someone to blame for this, and boy, is she gonna hear about it.  🙂
Images from IMDB, ABC, and CBS.

3 thoughts on “My name is Cheryl, and I’m addicted to bad TV”